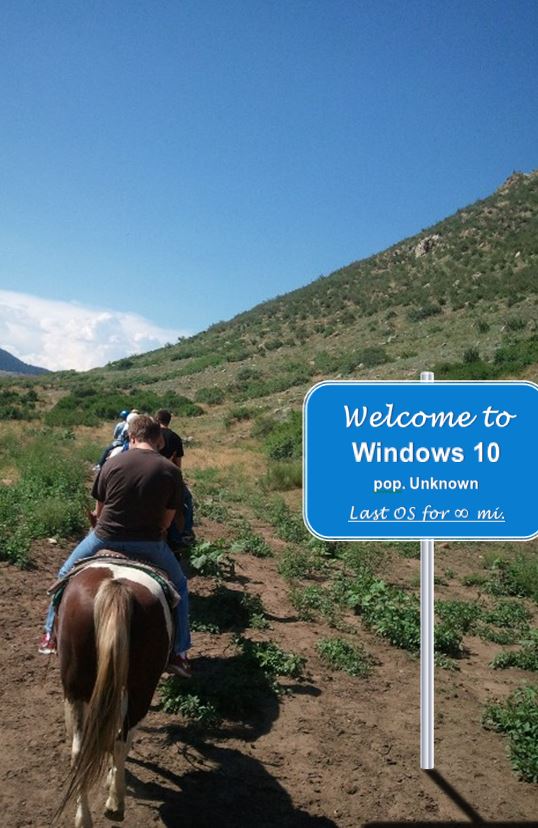 In a recent conference speech, Jerry Nixon, a Microsoft exec, announced that Windows 10 will be the software giant’s last operating system. Instead of creating an entirely new OS after Windows 10 is released (widely rumored to happen in July), Microsoft will continue to make improvements to Windows 10 through regular updates.

This type of OS-updating is already seen to some extent with the Apple OSX architecture. Nixon stated that a big reason behind the move was due to how the development team would lock themselves away for three years to create the next operating system… but their end-result would be a product the world wanted three years ago. Given how quickly technology changes, this new process will be a welcome departure.

Microsoft has not yet determined what it will call its iterations, post-Windows 10. However, we will not see the continued numerical names to its OS. Microsoft also mentioned that this will help sales, as the idea of selling end users on entirely new operating systems has become increasingly difficult. This way of thinking can be somewhat attributed to the failures of Vista and Windows 8.

Windows 10 will have some version of the Start Menu, which is what seemed to be a stopping point for many businesses. You can download a free preview of the operating system here. (For information on how to create a virtual Windows 10 preview, see my previous blog post, found here.)

Of special note, if you are a small-medium business: you can rejoice in the fact that you will no longer have to have a test machine in your network, to test all of your applications and specialized network setup, every time Microsoft releases a brand new OS. Once your company moves to Windows 10, you should not need to worry about having a new operating system, preventing your company from moving to the latest version. (Although you will want to ensure you are getting the appropriate updates, as they will be critical for keeping your computers protected, and allowing Microsoft to patch security flaws.)

Microsoft’s updates to Windows 10 will likely be free, similar to the way Apple handles its updates to OSX. In fact, if you own Windows 7 or later, and you update within the first year of Windows 10′s release, you will get Windows 10 for free. (Details for that can be found here.) The Windows 10 free upgrade is also free for users who have pirated software as well. (Details for that can be found here.) Microsoft is allowing this to happen to help combat piracy and ensure their OS is patched and in the hands of as many end users as possible.

Microsoft’s idea of giving away their OS for free is a departure from their old way of thinking. It is a strategic move, as Microsoft continues to battle Apple for the OS user base.

Microsoft has made some other bold changes lately, including a decision to discontinue its popular web browser Internet Explorer for its new product, Spartan. Spartan will reportedly be lightweight and very similar to other popular lightweight browsers on the market, such as Chrome and Firefox. The new browser will appear on Windows 10.

Our engineers at Everon are constantly staying on top of the tech-trends that affect small to medium businesses. If you have any questions about Microsoft or Windows 10, feel free to call 1-888-244-1748.

When Microsoft released Windows 8 they were targeting the tablet population. So naturally, with a tablet, they have built in some pretty neat tricks with hand gestures. One of the coolest tricks introduced is the addition of picture passwords.

In the past, when locking a machine, you would have to use a standard keyboard password that included letters, numbers, symbols, or any combination of those. With Windows 8 you can now choose a Picture Password. What this means is that you choose a picture, draw up to three gestures on the picture, and this will unlock your machine.

To turn on this feature, go to “Sign-In Options” under the Users tab (found under Change PC Settings). There will be an option for “Create a Picture Password.” 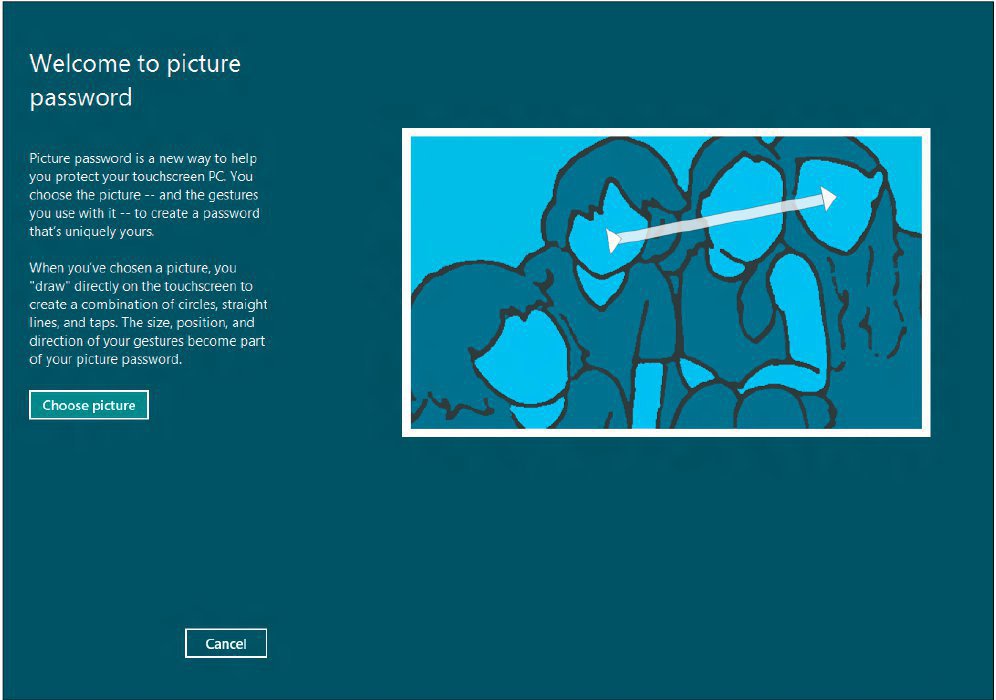 You are limited to what gestures you can put onto your picture. They can only be circles, lines, or taps. When logging in, you will have to use the same three gestures in the same three areas on the picture to get into the machine. But otherwise, it’s as simple as that.

One thing to note: researchers at Arizona State University and Delaware State University believe this method of authentication can be cracked rather easily. You can read about their study here. Consider that when creating your picture password. (To understand how secure passwords are and how easily they can be cracked, check out my previous blog post detailing that information here. While the picture password option is a very neat idea, and can work in safe, internal situations, nothing beats the standard text password.)

If you are like me, Windows 8 threw you for a loop. With Windows 7 and earlier, you could fly around in the OS, and life was simple. But Windows 8 forced you to think about where you needed to go. It also introduced the Metro design, in which you now had tiles. Tiles are great for anyone with a tablet, but not always convenient for office employees. 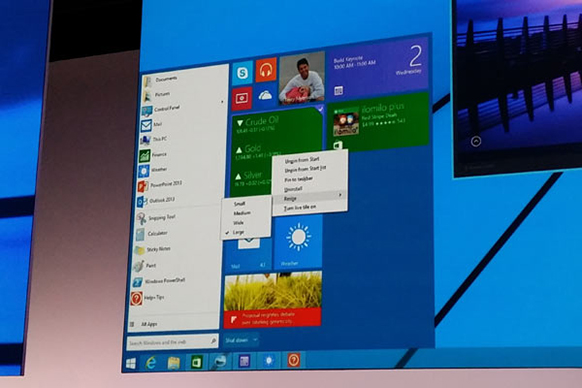 Last year the highly publicized Windows 8.1 update came out, which added in a new-and-improved Start Menu. It was nice, but tiles were still a big part of that feature. Tiles are utilized in areas that are frequented by everyday users (Documents, Control Panel, Administrative Tools, etc).

For those who dislike the tile feature, I introduce to you… Classic Shell. 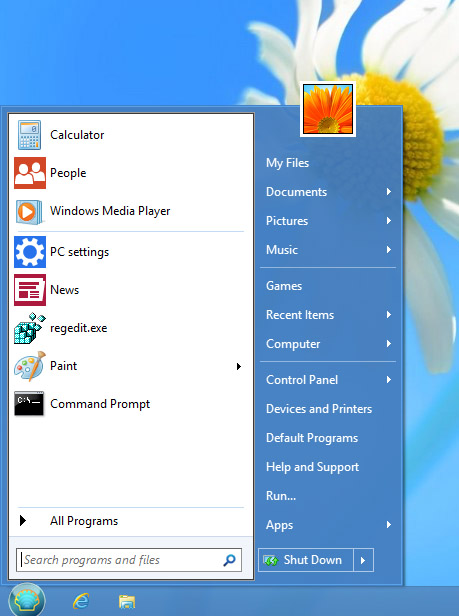 Classic Shell is software that can be installed on your Windows 8 or 8.1 machine, and get the look and feel you have been wanting. The nice thing about Classic Shell is its customization. You can make it look like a few variants of the Windows 7 start menu and you can also tell Classic Shell to boot to the desktop, so you are not defaulted to the Metro design.

Classic Shell also works on its Windows 8 server equivalents, such as Server 2012 and Server 2012 R2.

One of the issues we constantly get calls on is how to speed up the user’s PC to make it run faster. While there are many ideas out there on how to do this properly, I am going to discuss one area that was introduced in Windows Vista, and more-so in 7 and beyond, that bears keeping in mind when trying to speed up a Windows PC.

Windows Animations are something you might miss (especially if you have been using a Vista or greater OS for a while now). They are the little pieces of flair that Microsoft has added to your OS to give it a smoother, less block-y feel.

Click on Windows Explorer. Notice how it briefly expanded to its proper size? Ever notice how certain menus can fade or slide into view? These animations give you the appearance that Windows is smooth, but all of these animations must use up a bit of processing to handle.

Here is where you can turn them all off.

You need to get to the Advanced System Settings, found in the System Properties of your OS. One way to get there is to click on the Start logo ->right click on the word Computer ->go to Properties. 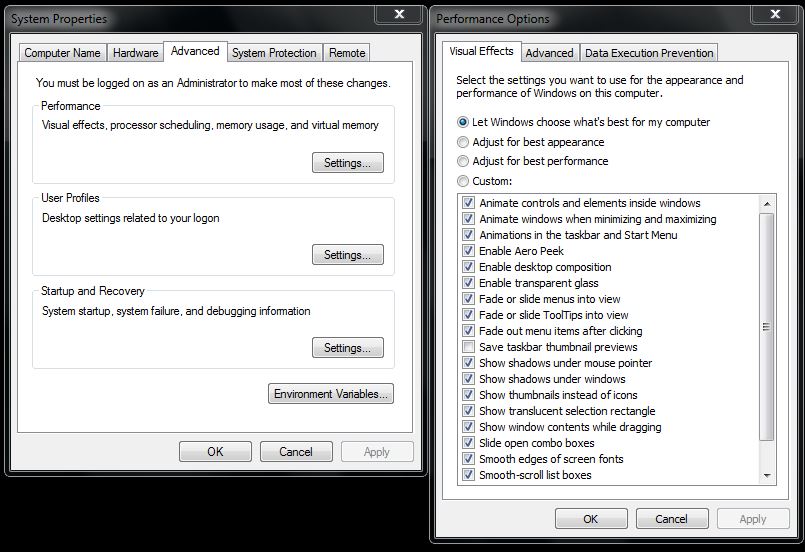 The difference in speed that you are likely to see is very minimal — this is just one small step to making the machine run faster. However, instead of animating the opening of windows, etc., they now snap right open. Even the appearance of this is likely to make you, or your client feel as if the machine is running faster. Sometimes even just small differences are what counts.

For many technicians, reusing a computer is part of the job. We have taken many computers, formatted the hard drives, re-installed OSes, and re-purposed the machines for other uses.

Did you know that when you reformat a hard drive through the standard Windows methods (i.e. deleting the partition during your Windows 7/Windows 8 install), you actually leave behind traces of your old OS? Reformatting a drive does not get rid of all of the data. In order to do that, you want to overwrite any existing data present with 0s (technical term referring to binary code).

How is this possible? Windows actually has a pretty cool built-in tool for handling this, called cipher.exe. 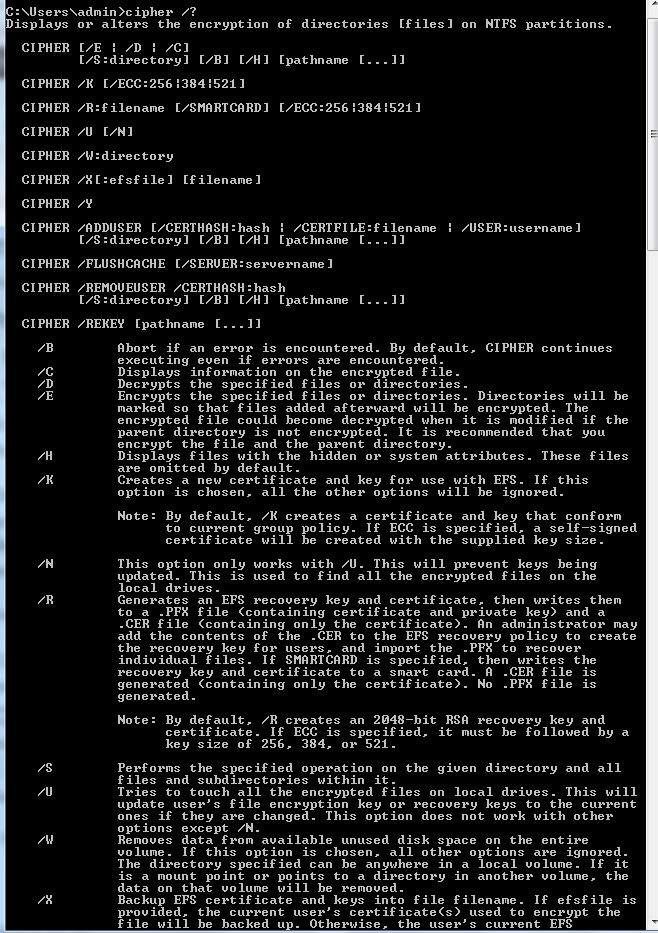 Cipher was built to encrypt and decrypt files and folders, but it can be used to overwrite data as well. Simply put, in order to securely overwrite your partition with 0s, open a CMD prompt and type: cipher /w:{drive letter}:

You can actually overwrite individual folders as well, just by adding the folder name onto the cipher CMD, like this: cipher /w:{drive letter}:\{folder name}

You can also encrypt files by using the CMD: cipher /e (files and folders that are later added to this option will also be encrypted)

And, of course, you can decrypt files by using the CMD: cipher /d (same as above, any files and folders added later are decrypted by default)

As with anything, really, this tool will make it a lot harder to recover any data that might have been on the hard drive. However, it is never a guarantee. Virtually anything can be recovered on a hard drive. Forensic companies use write-blocking devices approved by the Department of Defense, but that equipment is very expensive, and usually only in the hands of the good guys. Cipher.exe will protect you against most low-level bad guys looking to recover potentially harmful data off of your hard drive.