Google Chrome has quickly become a top contender in wanting to be your internet browser of choice. With its speed, customizability, and ease of use, I thoroughly enjoy and recommend it to everyone. Unfortunately, when any application starts to gain attention and a user base it also gains the attention of malware developers. 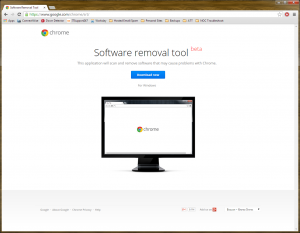 Browser malware can interrupt many things. It can hijack your searches to other search providers. It can add an incredible amount of ads and/or pop-ups. Or it can simply just slow things down to a crawl when browsing or opening/closing the application itself. 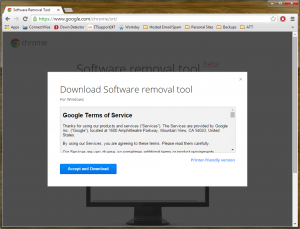 That’s where the Google Chrome Software Removal Tool comes into play. It is available to download at https://www.google.com/chrome/srt/.

Downloading and running the tool will do a quick scan, which will check for anything suspicious, then request to clear caches and such. 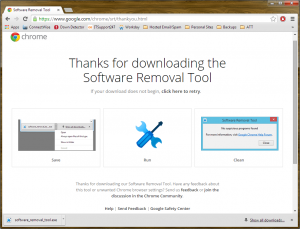 Very handy tool worth checking out, if Chrome is acting up for you. Only takes a few moments!

Windows has temp files stashed in a wide variety of places, including hidden directories that most people will never find.  These hidden temp file locations are some of the favorite hiding places for viruses and malware.  In some cases, they can slow down a computer that is running low on disk space.

The best application that I have found to accomplish this is TFC.EXE by Old Timer.

I clear all temp files
1. before running virus/malware scans
2. and on computers that are running slow.

Here is how I use TFC.exe to remove all these hidden temp files.

NOTE:
TFC (Temp File Cleaner) will clear out all temp folders for all user accounts (temp, IE temp, java, FF, Opera, Chrome, Safari), including Administrator, All Users, LocalService, NetworkService, and any other accounts in the user folder. It also cleans out the %systemroot%\temp folder and checks for .tmp files in the %systemdrive% root folder, %systemroot%, and the system32 folder (both 32bit and 64bit on 64bit OSs). It shows the amount removed for each location found (in bytes) and the total removed (in MB). Before running it will stop Explorer and all other running apps. When finished, if a reboot is required the user must reboot to finish clearing any in-use temp files.

TFC only cleans temp folders. TFC will not clean URL history, prefetch, or cookies. Depending on how often someone cleans their temp folders, their system hardware, and how many accounts are present, it can take anywhere from a few seconds to a minute or more. TFC will completely clear all temp files where other temp file cleaners may fail. TFC requires a reboot immediately after running. Be sure to save any unsaved work before running TFC.

Here is how to use TFC to remove all your hidden temp files.

Hello everyone, here is a cool trick if you ever need change local user, or admin passwords on a remote network.

You can change all the “Administrator” or other common local user accounts passwords on all the PCs in your network with a simple line of code.

You need to have admin rights over those PCs. Test it with a single test PC before doing it in a grant scale to avoid unwanted results.

I have been getting this question a lot so, I am going to create a post on how you can find the elusive Windows8 recent folder.  This folder is used by many people to open the last files that they have been editing.
Here is how it is done!

2: This will bring up the run console.

4: Vola! there it is, you can drag the icon and make a desktop shortcut if you like.

Thanks and I hope this helps!

Windows 8.1 has gone a long way towards fixing some but certainly not all of Windows 8′s woes. Here are five ways Windows 8.1 improves upon Windows 8.

Boot to the desktop

Yes, it’s finally here. With Windows 8.1, when you log in you can bypass the Start screen, and go straight to the desktop. Given that many people use powerful desktop apps rather than the more anemic Modern-style apps, this is a very big deal.

Windows 8.1 ships with Internet Explorer 11, and it does the seemingly impossible: It actually makes the Modern-style IE useful. The Windows 8 Modern-style Internet Explorer was by far the worst browser I’ve ever used. How bad? It didn’t have a Favorites manager. How bad? You could only have 10 sites open at once in it. How bad? Well, no need to pile on, but it was pretty awful. The new version includes a Favorites manager and lets you open as many sites simultaneously as you want. I actually use it now.

Search in Windows 8 was not a pretty thing. Type in a search term, and it searched for apps, settings, and files, but you couldn’t see all the results at once. You instead had to look at results category by category. And it didn’t search the Internet.

In Windows 8.1 that’s all fixed. You see results from your local PC and the Internet, and you see them all at once. There’s also every a very nifty “Search Hero” that grabs information from all over the Internet, including multimedia content, and presents it in a visually pleasing, easy-to-scan wrapper.

Windows 8′s native Modern-style apps were an anemic bunch. Underpowered and often pointless, they were therefore unloved. Windows 8.1 ships with some very nice new apps, and powers up some of the older ones. The Photos app now lets you edit photos — what a concept! And there’s a nice, new Food and Drink app as well.

In Windows 8, you had to switch between a settings screen in the Modern interface and the Control Panel in the desktop to customize how Windows works. In Windows 8.1, more settings have been moved into the Modern settings screen, so there’s less of a need to look for settings in two places.