In our busy lives sometimes we just don’t have the resources or time to set up a new computer from scratch; it’s easier to buy a pre-fab PC from the store and then remove the stuff we don’t need. The removal process often times seems pretty straightforward — plug it in, turn it on, delete the preinstalled stuff that we just don’t need or want. But more often this turns from a few minutes into a few hours of uninstall, reboot, uninstall, reboot…

Almost every PC manufacturer (such as Asus, HP, Dell, Toshiba) is guilty of preinstalling their own versions of programs for things that every Windows OS can already do on its own, like performing backups, managing wireless connections, and monitoring battery health. That is where Decrap comes into play. It is an autonomous tool that removes all manufacture bloat in one, quick strike.

Once installed, the guided “Decrap” is fairly straightforward. 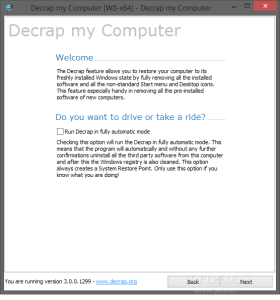 Select what you want it to remove. Most manufacturer bloatware will include its name in the preinstalled software. If you’re nervous about whether or not you’re removing something critical, rest assured that Decrap does check its database against a known-bloatware database to know what’s needed and what’s junk. (If you’re still nervous about this, however, just call us at Everon: 888-244-1748.) 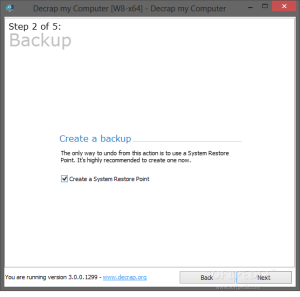 For the non-techie I would suggest Fully Automatic mode for a step-by-step walk through of what is happening. Also, the registry clean-up at the end is crucial. Registry affects boot up time, and if it is stuck looking for software that doesn’t exist, it only slows you down. Today I decided to round up a list of very useful admin commands for CMD.

JAVAWS: View the cover of JAVA software (if installed)
AC3FILTER.CPL: Opens the properties AC3 Filter (if installed)
FIREFOX: Mozilla launches Firefox (if installed)
NETPROJ: allow or not connecting to a network projector (For Vista only)
LOGOFF: closes the current session
SHUTDOWN: shut down Windows
SHUTDOWN-A: to interrupt Windows shutdown
%WINDIR% or %SYSTEMROOT%: opens the Windows installation
%PROGRAMFILES%: Opens the folder where you installed other programs (Program Files)
%USERPROFILE%: opens the profile of the user currently logged
%HOMEDRIVE%: opens the browser on the partition or the operating system is installed
%HOMEPATH%: opens the currently logged user C: \ Documents and Settings \ [username]
%TEMP%: opens the temporary folder
VSP1CLN: deletes the cache for installation of the service pack 1 for Vista
System File Checker (Requires Windows CD if the cache is not available):
SFC / scannow: immediately scans all system files and repairs damaged files
SFC / VERIFYONLY: scans only those files system
SFC / Scanfil = “name and file path”: scans the specified file, and repaired if damaged
SFC / VERIFYFILE = “name and file path”: Scans only the file specified
SFC / scanonce: scans the system files on the next restart
SFC / REVERT: return the initial configuration (For more information, type SFC /? In the command prompt CMD.

Windows has temp files stashed in a wide variety of places, including hidden directories that most people will never find.  These hidden temp file locations are some of the favorite hiding places for viruses and malware.  In some cases, they can slow down a computer that is running low on disk space.

The best application that I have found to accomplish this is TFC.EXE by Old Timer.

I clear all temp files
1. before running virus/malware scans
2. and on computers that are running slow.

Here is how I use TFC.exe to remove all these hidden temp files.

NOTE:
TFC (Temp File Cleaner) will clear out all temp folders for all user accounts (temp, IE temp, java, FF, Opera, Chrome, Safari), including Administrator, All Users, LocalService, NetworkService, and any other accounts in the user folder. It also cleans out the %systemroot%\temp folder and checks for .tmp files in the %systemdrive% root folder, %systemroot%, and the system32 folder (both 32bit and 64bit on 64bit OSs). It shows the amount removed for each location found (in bytes) and the total removed (in MB). Before running it will stop Explorer and all other running apps. When finished, if a reboot is required the user must reboot to finish clearing any in-use temp files.

TFC only cleans temp folders. TFC will not clean URL history, prefetch, or cookies. Depending on how often someone cleans their temp folders, their system hardware, and how many accounts are present, it can take anywhere from a few seconds to a minute or more. TFC will completely clear all temp files where other temp file cleaners may fail. TFC requires a reboot immediately after running. Be sure to save any unsaved work before running TFC.

Here is how to use TFC to remove all your hidden temp files.

Normally everyone has a specific program, or folder that they have to open every day usually multiple times. There is a really neat trick that can help save some time as well as is fun to setup.

Please remember that this will only work for shortcuts that are actually located on your desktop.

1: Create a desktop shortcut for the application you want one created for. In order to do this go to where the application or folder reside and right click on it, then mouse over the Send to -> then click on where it says “Desktop (create shortcut) and click on that. This will place a shortcut on your desktop. 2:  Once this has been sent to your desktop, you can now right-click on the short cut you have created, select properties, then you will see a line that says “Shortcut Key: None” If you click in this line you may now create a short key. 3:  Put in your shortcut, for example if you use the letter A, a shortcut key will be created. Windows will automatically format the shortcut key for you with a Ctrl + Alt + A. What this means is if you press Ctrl, Alt and A at the same time, your program or folder will automatically open for you. Once you have selected the letter you would like to use, press apply and then ok. 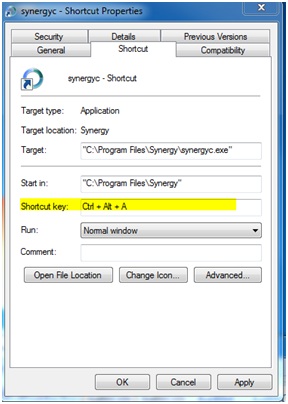 4: That is it you now have your very own shortcut key for your computer. As long as that shortcut that you have created resides on your desktop you may use this trick.

There is some great news coming down the wire from drop box, for its paid user accounts.

Recently the Dropbox Company revealed that it would be increasing the storage space available to its paying users at no extra cost! Dropbox is planning on raising the 50 and 100 GB tiers with 100 and 200GB tiers for FREE! This will allow users to really take advantage of online cloud storage.

Also, there is great news on the wire for power users too, Dropbox plans on pushing out a 500GB plan for those users that require much more space, allowing more file portability for businesses! There is no word yet however on how much this will cost, but keep your eyes peeled.

These upgraded Dropbox plans will went live late night Tuesday 7-10-12, and the DropBox team converted all the paid users by early Wednesday morning 7-11-12.

What is this Dropbox some might ask? Dropbox is an innovated online storage solution. No more need to loft hard drives and pen drives around anymore. As long as you have internet access, you would be able to grab your files off the internet. The days of accidently forgetting to bring a pen drive or leaving a file on your local desktop at home are now over!