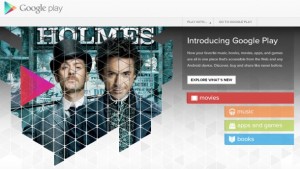 This recent changes benefits both Google and the end users.  For Google it takes the stigma off “The Android Market” being only for Android users.  Google offers a suite of products for all users to take advantage of yet with “Android” being in the title it gives the impression that those products are exclusive to Android users only.  For users like ourselves, we can now seamlessly store all of our entertainment in one place utilizing the power of the cloud.

One thing to keep in mind is that your experience will vary while using this service based on your location. Here is a quote from the official blog:

Like all things from Google we need to wait until the newness of it all wears of before passing judgement.  Google has had many products that have not performed as predicted (anyone remember Google Buzz?) but so far things are looking promising for Google Play.

Check out the introduction video below and let me know your thoughts.

Choosing the right password is more important than you may think!
Customize your Ringer Volume with Android's Intelligent Ringer
Will Ransomware Cell Phone Attacks Reach the U.S.? (And what to do if you get infected)